A race to the finish

Saratoga Race Course in Saratoga Springs, N.Y., hosts its annual horse racing meet over 40 summer days in 2019. Known as the “oldest racetrack in America,” Saratoga’s racing season begins July 11, when thousands of fans will descend on the Upstate New York city of about 27,000*. That influx of people injects the local economy with $237 million in economic activity and nearly 2,600 job. Needless to, Saratoga Race Course is a vital part of the city’s economy. That makes the track’s decision to build a new three-story, trackside facility between the 2018 and 2019 seasons a bold and extremely time-sensitive move.

Announced on April 30, 2018, the construction project broke ground Sept. 4, 2018, just two days after the final day of racing season. Building the 1863 Club, as the project was eventually named in honor of the year of the track’s first event, faced a daunting schedule. Just a little more than 10 months separated the start of construction and the first day of the 2019 racing season on July 11. To complicate matters, much of the 1863 Club’s construction would take place during the unpredictable and often uncooperative winter months. A project delay or—worst-case scenario—missing the deadline for completion would disrupt the lives of thousands of fans, employees and residents.

When New Millennium Building Systems got the call to supply a long-span composite floor deck for the project, employees sprung into action immediately. With the tight deadline in mind, the design team ultimately selected Deep-Dek® Composite for the project. Its light weight, versatility and safety pushed it to the front of the pack. Above all, however, its ability to be erected quickly was of utmost importance.

The strength of Deep-Dek® Composite surprised ironworker Jack Brighton, who was foreman of the crew erecting the 1863 Club frame. “As ironworkers, we are used to deck only spanning 8 to 10 feet without support columns; these Deep-Dek® Composite panels were 30 feet with no temporary supports in place until a few days before rebar and concrete were added.”

To get the project on the right track, Marty Williams, design development manager at New Millennium, says the work begins behind a desk, not at the construction site. A myriad of project details is nailed down via phone calls and emails and internal meetings: purchasing, drawing approvals, scheduling and implementing production, material delivery and more.

“There are a lot of steps that need to happen internally for these jobs to deliver on time and keep them on schedule,” Williams says.

As the 2018 racing season was unfolding on the track, New Millennium was fully engaged in “behind-the-scenes” planning that would jump-start the project and put construction crews in position to begin building immediately after the last horse crossed the finish line. Among the early tasks involved determining how the deep-ribbed composite floor deck fits in to the overall design of the hospitality clubhouse. New Millennium collaborated with the engineer of record, DeSimone Consulting Engineers, to finalize the slab design. Design checks included stress, instantaneous and long-term deflection and vibration response due to human activity.

This early-stage collaboration helps keep the project on schedule by avoiding insufficient or unclear information that could hinder progress later. Among the many firms involved in the project was MLB Construction Services the project’s local general contractor and one of the oldest in the Saratoga Springs area; SOSH Architects of New York City; Gilbane Building Company of Albany, N.Y.; and Breton Steel fabricators of Quebec. 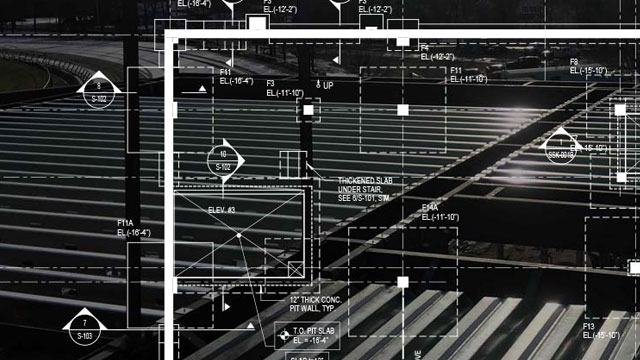 The 1863 Club replaces what was a seasonal area made up of tents and trailers called At The Rail. The new, permanent three-story structure will feature a banquet area on the first floor that accommodates 500 guests; a bar, event space and dining club on the second level; and luxury boxes on the third floor. Servicing all three levels will be a full kitchen in the basement. The elevated live load from hundreds of horse racing fans demanded a versatile long-span composite floor system. Deep-Dek® Composite 6.0 met those demands with its continuous slab design and a sufficient combined depth of 11.125” (Deep-Dek® 6.0 plus 5 “inches” of concrete cover) for required stiffness, Williams says.

Not only does this deep-ribbed composite floor system satisfy the live loads of such amenities, but it also allows fans unobstructed views thanks to long spans that require minimal supporting columns to mar sightlines. Williams says columns were spaced 30 feet apart, with open bays reaching 900 square feet. To enhance sightlines, DIVERSAKORE® composite beams only dropped 7 inches below the Deep-Dek® Composite floor.

Like the horses that round Saratoga Race Course, the pace of construction of the 1863 Club would need to be as swift as possible. As luck would have it, Mother Nature did not produce many roadblocks during the project, says Williams, who noted most of the winter season was fairly mild.

With the weather cooperating, framing of the structure began in late November 2018. Deep-Dek® was paired with DIVERSAKORE® composite beam and column frame. Eight weeks later at the end of January 2019, work crews had the entire facility framed and ready for further construction.

Further amplifying speed of erection, DIVERSAKORE® beam to columns use a simple two-bolt connection designed to support construction loading — “a pretty quick install,” Williams says. Complete service stage strength is achieved by passing rebar through the DIVERSAKORE® beams before concrete is poured. Once the concrete cures, the frame attains its fully realized strength. 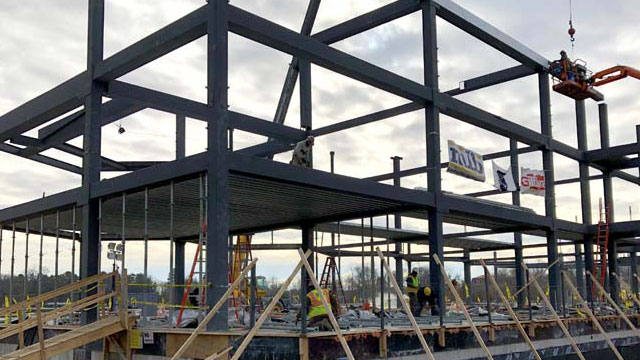 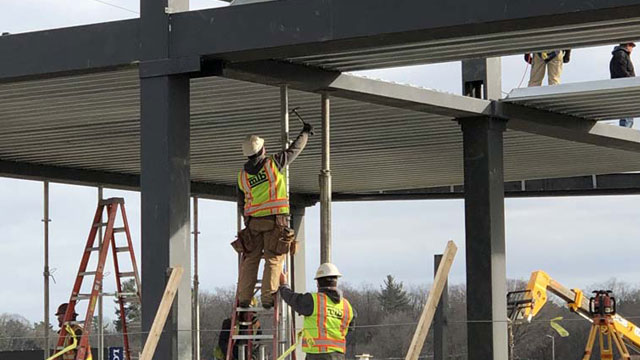 Framing of the 1863 Club began in late November 2018 and was completed by the end of January 2019. Although the DIVERSAKORE® frame and Deep-Dek® Composite panels were erected in the winter, bad weather did not hinder its progress.

“It’s not like any deck I have ever used before,” he says. “As ironworkers, we are used to deck only spanning 8 to 10 feet without support columns; these Deep-Dek® Composite panels were 30 feet with no temporary supports in place until a few days before rebar and concrete were added.

“Everybody I had working with me there was very skeptical at first, then they realized the deck will hold the weight of our crew.”

“The combination of Deep-Dek® Composite and DIVERSAKORE® requires no spray-fireproofing,” Williams says. “It’s an unprotected composite steel and concrete frame system. The concrete is what gives it its fire rating. You’re not going to spray-fireproof a concrete frame, but when it’s all steel, you need the spray.”

The 1863 Club is costing the New York Racing Association $30 million to build, according to the Daily Gazzette. It is the largest capital improvement project at Saratoga Race Course in more than 50 years. At the end of the 2019 racing season at Saratoga, about $20 million will have been awarded to winning jockeys and horse owners. Horse racing is clearly a big business, and that means the 1863 Club project’s bottom line is a big deal.

That’s where Deep-Dek® Composite’s combined benefits pay off: It is a cost-effective option for many projects.

Because it is a lightweight thin slab with long-span capabilities, Deep-Dek® Composite requires fewer supporting beams, reducing material costs and subsequent labor to fabricate and install.

During its leg of the race to the project finish line, New Millennium accomplished its task: delivering a high-quality, budget-friendly product quickly, efficiently and—most importantly—on time. 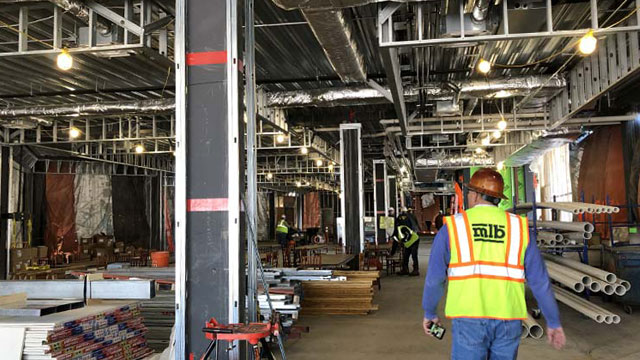 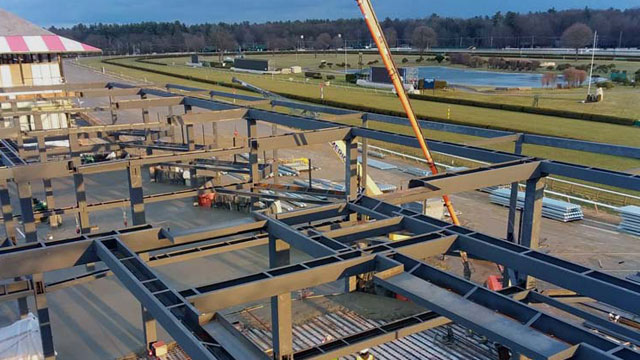 The long spans that Deep-Dek® Composite creates without the need for supporting columns will mean unobstructed views for horse racing fans at the 1863 Club. 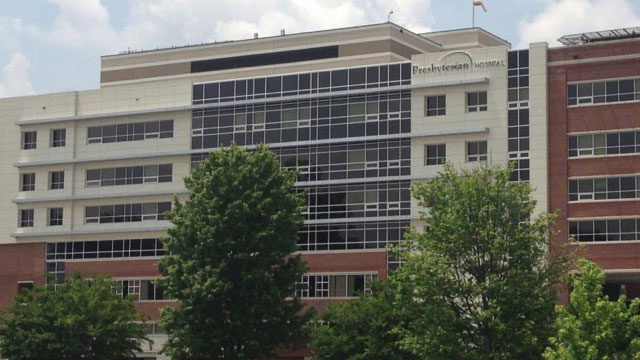 While hospital operations continued, strategic planning to speed construction and attentive crews built a four-floor expansion over a cancer center. Quick and efficient construction was imperative, since patients and staff occupied the floors below. The total project took only 28 months to complete; the four-floor frame was erected in only 16 weeks. 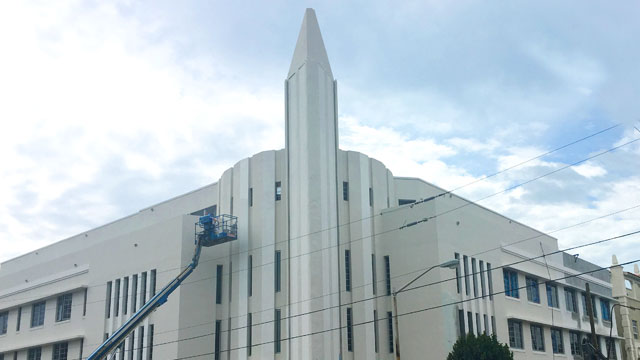