Like countless others with modern-day New Orleans as a backdrop, the story of the Louisiana Children’s Museum changed forever when Hurricane Katrina struck the city on Aug. 29, 2005.

Just a few weeks before that fateful summer day, the museum’s board of directors had approved a modest $2 million plan to remodel 1,500 square feet of the facility’s 30,000 square feet. That plan was swept aside when Katrina shuttered the museum. Simply surviving, yet alone expanding, became the museum’s priority. In the wake of the storm, the museum was closed for 10 months for cleanup.

It wasn’t long after the museum’s reopening when plans for an entirely new facility began to take shape. Nearly 14 years to the day Katrina made landfall, the new Louisiana Children’s Museum in New Orleans City Park celebrated its grand opening Aug. 31, 2019.

New Millennium Building Systems had reason to celebrate as well. The museum’s signature feature, a skewed, gabled metal roof, is made up of 1,075 panels of New Millennium Super Versa-Dek® 6.5 LS Acoustical architectural roof deck while the floor consists of Composite Floor Deck 3 Cellular Acoustical. Both systems contribute to the facility’s overall design concepts, among them mitigating noise in interior spaces and bringing the natural setting inside.

The Louisiana Children’s Museum campus encompasses 8.5 acres of land in City Park, although the 56,400-square-foot museum sits on less than 1 acre overlooking a lagoon. The museum itself features two wings with a glass hallway connecting them, laid out in an H-shaped configuration. A 7,770-square-foot front porch greets visitors after they cross a bridge leading to the museum entrance. The covered porch looks over the lagoon and features exposed Super Versa-Dek® 6.5 LS Acoustical deck. Part of the Versa-Dek® family of architectural deck, the dovetail roof deck has added depth that enhances the strength of the dovetail shape, providing clear spans up to 27 feet and overhang capabilities. The longest span required in this project, however, was 10 feet.

“The long-span deck is an integral part of the architecture,” says Alex Therien, market development manager at New Millennium. “It is an exposed design element.”

Outside the facility, the museum features 47,000 square feet of exhibit space and numerous outdoor learning environments. The site’s many live oak trees necessitated the distinctive H-shaped layout of the building, which was designed by Seattle-based architecture firm Mithūn, supported locally by Waggonner & Ball. In addition, more than 125 new trees were planted to provide shade for families, homes for animals and areas for children to explore.

“Mithūn and the Louisiana Children’s Museum’s design intent is to connect children to the natural environment,” Therien says. “It’s a connection to nature—a connection to water and culture. The building is literally connecting to the landscape.”

“The whole project was really intended to be very transparent, very indoor-outdoor,” says Stouse, who holds a master’s degree in architecture. “There are a lot of very deliberate connections to views in the park. We’re in this beautiful park setting with these old majestic live oaks everywhere. There was a real intention to frame the outdoor views as well as a programmatic intention to connect children to nature.”

“The building very much acts in that way.”

One of the first things museum visitors encounter is the 7,700-square-foot covered front porch that dramatically shows off the exposed dovetail acoustical roof deck.

On May 20, 2017, museum construction began with a ceremonial groundbreaking. Soon after, New Millennium team members were working on the museum’s architectural roof deck and composite flooring system. Project detailing began in earnest in December 2017. The design of the building, as well as several external factors, presented New Millennium with several challenges. 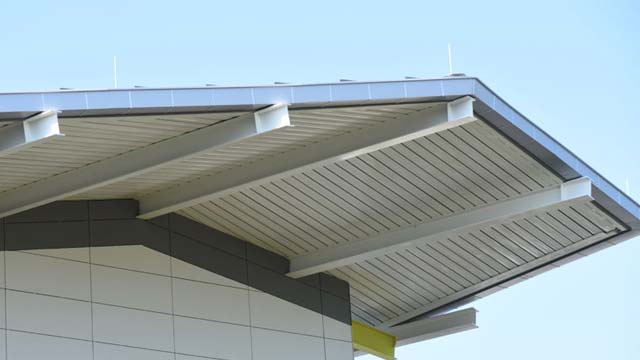 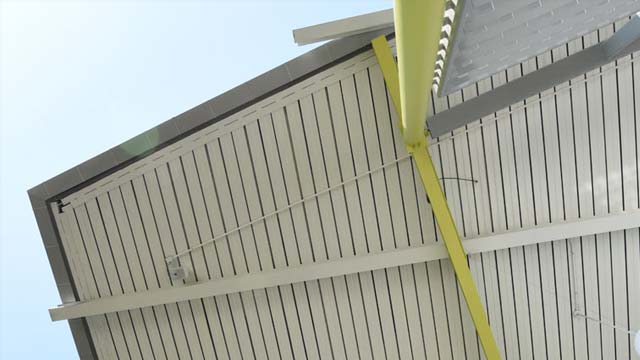 The roof of the Louisiana Children’s Museum has multiple angles that required each panel of dovetail acoustical roof deck to be manually cut and assembled.

The end result is visually striking. To accomplish that was no easy task. The complex design required out-of-the-ordinary thinking during assembly and erection.

“The roofing structure is all diagonal beams, diagonal to the outline of the building,” says Trent Fowler, specialty deck project manager at New Millennium. “Everything was on an angle, everything was on a skew, which meant each of the Super Versa-Dek® 6.5 sheet lengths and the air dam placement within these sheets was unique.”

How monumental was that effort? In total, 1,075 sheets were delivered to the site between February and July 2018.

“We had a detailing- and design-created list for every individual placement,” Fowler says. “Each sheet had to be placed exactly in the right spot.”

That necessitated every panel of the roof deck to be hand-cut and individually assembled at the site to ensure they fit the angled roofline perfectly. Fabricari, the project’s erector, made all the cuts in the field.

“The saw they used was enormous,” Fowler says. “It was the largest circular hand saw I’ve ever seen. They were cutting through two layers of this deck, and some of it already had acoustic batting installed.”

Because the dovetail roof deck’s side-lap connections were to be screwed into place, a topcoat was applied in the field after placement to avoid damaging the finish.

The museum’s dovetail roof deck sheets were painted after being screwed into place so that the field-applied topcoat would not be damaged.

A children’s museum is a noisy place, as anyone who’s visited one knows well. With more space, more exhibits and more visitors, the Louisiana Children’s Museum is no different, but the new facility is designed to mitigate ambient noise.

In this case, New Millennium provided both field- and factory-installed foam noise dams and acoustic batting inside of the deck to obtain “quiet areas,” Fowler says. The dams were used where the acoustic deck spanned walls from one area of the museum to another to prevent noise from traveling throughout the facility.

“That detail was a challenge: To figure out how you acoustically differentiate spaces using the deck,” Stouse says.

The acoustical roof deck achieved an NRC of 1.05. The composite floor that separates the two levels of exhibit space is equipped with acoustical elements in the deck cavities that enabled it to reach an NRC of .85.

The acoustical architectural roof decking used in the museum achieves a noise reduction coefficient of 1.05.

“You can’t stop perforations midspan,” Fowler says. “The acoustic decking extended beyond the wall to the outside of the deck, where those perforations had to be covered. There were air dams and plugs, some were factory-installed, some were field-installed, to block any air from the outside entering the building or any of the air-conditioned air from escaping the building.”

In addition to the air dams inside the top and bottom flutes of the deck, the exterior deck’s perforations were blocked via a solid metal cover.

To prevent air escaping or entering the museum, the exterior perforations on the exposed deck are blocked with a metal cover.

Even by New Orleans standards, the amount of rain experienced during construction of the museum was voluminous. In one month it rained 22 days, and Therien says one soggy stretch featured 44 straight days of rain.

“It’s hard to keep a project on time whenever you have that much rain. There were a lot of rainout days,” Fowler says. “It was quite a muddy mess.”

“We had equipment disappearing in the mud like it was quicksand,” Stouse adds. “The contractors are to be completely commended for working through that. I don’t think I’ve seen anything like it.”

To avoid adding to the mess during rainy periods, Fowler coordinated with the site’s deck erection superintendent to ensure only necessary materials were delivered.

The challenges and complexity of the project combined to knock construction off the target pace. New Millennium took several measures to ensure its part of the project recovered some of that lost time.

At one point during roof erection, labor and hours were increased at the fabrication plant to expedite the schedule of assembly. At the job site, an extra deck installation crew was put in place. New Millennium-Memphis brought in additional crews to increase material output and supplied deck to the site to keep erection moving. Deliveries were coordinated with erection crews to enable them to work multiple areas at the same time.

In addition, New Millennium also sent roof deck panels to the job site to be assembled concurrently with erection at the request of general contractor Roy Anderson Corp. and erector Woodward Design + Build.

“New Millennium deck engineering approved the constructability of this method,” Fowler says. “New Millennium shipped the components and provided field assistance and inspections to ensure the deck was assembled in accordance to our guidelines.”

Fowler, based in Columbia, S.C., also shepherded the project along with several site visits and everyday phone calls.

“I did go to the job site quite a bit to work with Woodward Design + Build in their installation,” Fowler says. “I spoke with the foreman overseeing installation of the deck on a daily basis to get him what they needed. We were in constant communication.”

The Louisiana Children’s Museum is now one of the featured attractions in New Orleans City Park, a 1,300-acre outdoor oasis. Museum officials expect more than 225,000 visitors per year at the new location—10,000 visited during Labor Day weekend alone, Stouse says.

The museum is specifically designed to be a social, cultural and early childhood learning resource.

“With the building, what we wanted to do is say ‘children matter’ and that we, as a city and a state and a region, are putting children first,” Stouse explains. “So, we went bold. Very often, children’s museums are really scrapping together the resources to get anything off the ground, and we just said ‘No. This is really important.’ We feel like if we don’t put children first, then we are compromising our future. Children’s museums and institutions like ours can support not only the children and families who come to our institutions, but we can also support educators and we can collaborate with pediatric institutes to holistically create a positive ecosystem for the development of children.

“We basically said we believe in the potential of children, and we’re going to show it in how we build for them and invest in them.”

Being part of a project with such a noble mission is not lost on New Millennium.

“Mithūn’s overall concept to minute details are thoughtfully articulated,” Therien says. “It is an outstanding project, a community asset. We should be proud to have played our part.”