Aloft was designed with a modern, open-air style that incorporates the look and feel of the ocean environment

Little did he know it, but an online continuing education course Keith Iott took a few years ago would help form his vision for a first-of-its-kind hotel project in Ocean City, Md., in 2019.

Iott was both architect and engineer for the Aloft Ocean City project, a five-story, 78,000-square-foot waterfront hotel with picturesque views of Isle of Wight Bay. The first resort hotel for the Aloft brand, it opened in May 2019, just in time for the summer vacation season.

Meeting the opening date was crucial to the project, as was keeping costs down and retaining Aloft’s open-air style with common spaces uninterrupted by columns and guest rooms with maximum floor-to-ceiling heights. To complete those objectives, Iott’s building design is made up of a steel podium frame for the ground floor while the guest rooms above feature load-bearing cold-formed steel (CFS) demising walls with a 3.5-inch dovetail long-span composite floor deck with a 2-inch lightweight concrete cover.

Iott says the combination of dovetail composite floor deck and CFS panelized walls is a first-of-its kind framing system for Ocean City, where post-tensioned concrete is the prevailing construction method. In fact, he says the Aloft project might not have even proceeded without the cost and time savings associated with the dovetail deck-CFS combo.

“The biggest problem I was seeing with post-tensioned is it eats up a tremendous amount of the schedule and a good chunk of the budget,” says Iott, who has used post-tensioned concrete on dozens of projects. “I was looking for an alternative that would allow us to have the non-combustibility and durability of a concrete system but without some of the downside potential.”

“Long-span composite deck and CFS walls have successfully framed so many hotel and apartment developments, it’s become too difficult to track them,” Williams says. “It was surprising to hear Aloft was a first for Ocean City.”

Open for the season

As a resort town, the hospitality industry is important to Ocean City. Each summer, about 8 million visitors, descend on the popular vacation town. The Aloft hotel added 120 rooms to the town’s 10,000-plus guest room count to accommodate the seasonal crush.

The project broke ground in March 2018. Completing construction as quickly as possible was paramount to Iott and developers Blue Water Development and Real Hospitality Group, and Sunsations Real Estate Group. The CFS-dovetail composite floor deck system helped speed construction. Iott says the project took 14 months from foundation to certificate of occupancy—2.5 to 3 months quicker than what would have been possible using post-tensioned concrete. Compressing the schedule was important, Iott says, in order for the hotel to be able to book the entire summer tourist season.

“People were pretty amazed how quickly the frame went up once we got above the podium,” says Iott, owner and founder of Iott Architecture and Engineering. “This is a pretty slick system.”

Savings by the numbers

The dovetail composite floor deck and CFS load-bearing demising walls provided a variety of impressive benefits. Here are some of them.

From the ground up, the dovetail composite floor deck on CFS frame contributes to speedy erection by virtue of its lightweight materials. The Aloft Hotel sits on a spread footing foundation—which couldn’t have been used with a heavier structure—instead of a pile foundation. That saved precious time, Iott says, because of the labor and material required for piles.

On the ground floor, the lightweight floor slabs above allowed Iott to achieve open spans uninterrupted by columns.

“Because of the significantly reduced dead load of the floor slabs of the dovetail composite floor system (38 pounds per square foot) vs. the dead load of post-tensioned concrete slabs (100 pounds per square foot), we were able to design a 4,000-square-foot column-free bayfront banquet venue that enjoys spectacular views of the bay and the tidal marsh,” Iott explains. “The banquet venue has four floors of guest rooms above. This would have been very difficult and expensive to achieve using a post-tensioned concrete floor system within the proscribed height limitations.”

The columns used elsewhere on the ground floor were smaller since they were supporting lighter loads, Iott says. Instead of 12-inch-by-36-inch columns, the project features up to W8” steel columns. Columns with less girth helped produce clear sightlines and open spaces.

“We ended up with a much more open floor plan just simply by reducing the mass of the columns,” Iott says. “It gave us much more design flexibility, which lead to more unimpeded views to the bay, the marsh and the outdoor amenities.”

Iott was particularly pleased with the ability to have workers on the dovetail composite floor deck a day after concrete floor above was poured. With 30 years of experience to draw on, Iott estimates this was a primary time-saver during erection.

“That was the beauty of what happened here, when the floor was poured, plumbers were roughing-in plumbing the day after,” Iott says. “You just don’t see that in post-tensioned concrete construction. It compressed the schedule. We were able to save significantly on the schedule.”

The Aloft guest rooms are primarily 13 feet at their longest, with some larger rooms 19 feet. Dovetail composite floor deck creates clear spans up to 28 feet—more than meeting the demands of the project—with unshored spans reaching 16 feet. Iott says this saves a considerable amount of time. The absence of shoring in the 13-foot units allowed trade mobilization immediately after the floor above was poured.

Man-hours required to set up, install and then remove the shoring after concrete has cured were substantially reduced. The demands on the shoring engineer were similarly lessened in a minimally shored frame. 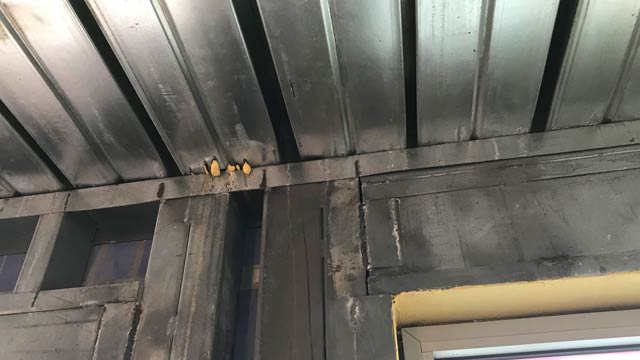 The combination of dovetail composite floor deck and CFS load-bearing demising walls contributed to shaving 2.5 to 3 months off the Aloft’s construction. 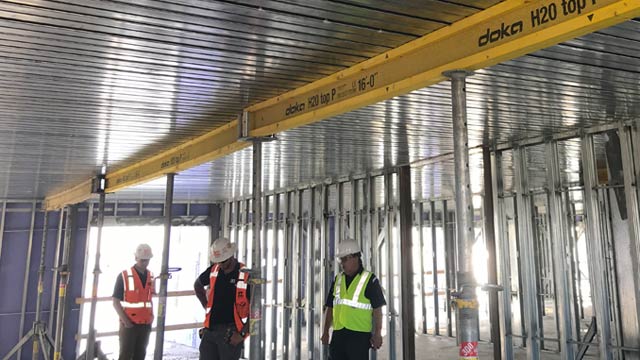 The dovetail long-span composite deck was erected with shoring in Aloft guest rooms with 19-foot spans but did not require shoring in rooms with 13-foot spans, creating cost and times savings during the project. 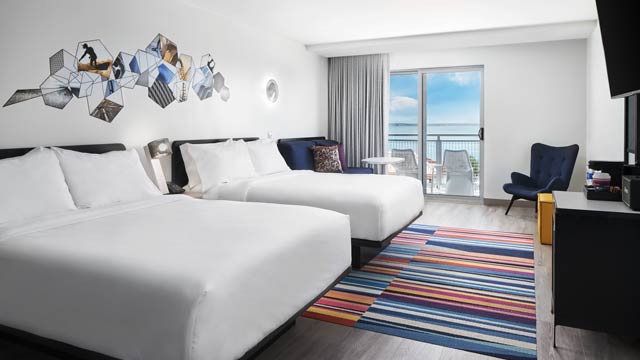 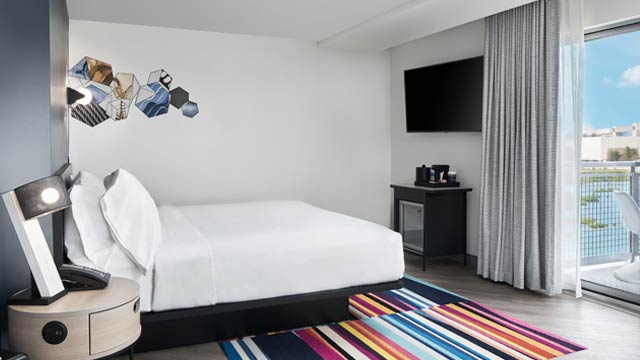 The Aloft guest rooms feature an airy, loft-like feel thanks in part to a 5.5-inch dovetail composite floor deck slab that allowed Iott to save 2.5 inches per floor.

Ocean City tightly regulates the height of new construction, limiting new construction to 50 feet. It’s understandable the municipality would not want skyscrapers spoiling the scenic views of the bays. With the dovetail thin-slab composite floor deck, Iott maximized available space per floor while adhering to the stringent zoning codes.

“We were able to throw that extra 2.5 inches of increased ceiling height into each guest room floor,” Iott says. “That may not sound like much, but with post-tensioned concrete we would need an 8-inch floor slab.

“Because thin floors help lower building height, they fit perfectly in urban and other high-density localities like Ocean City,” he says. “It’s particularly critical here because everyone wants to feel the sun and see the water. Controlling floor height helps make that happen.”

The UL-approved head-of-wall design utilizes staggered deck flutes to create an uninterrupted concrete break that compartmentalizes fire and smoke between the units. The “built-in” breaks eliminate the labor, time and cost of placing expensive—and messy—fire sealants needed if the deck flutes were set aligned over the CFS bearing walls.

“The minute the concrete cures, you’re virtually fire-stopped,” Iott says. “Ocean City has a very, very thorough and very responsible fire marshal’s office. They’re very knowledgeable, and fire-stopping is always an issue, as it should be. When I showed the fire marshal that head-of-wall detail with the staggered deck flutes, he got it instantly. He said, ‘OK, that’s great. It’s perfect.’ ”

“Based on the Aloft’s height and occupancy, the fire code only mandated a 1-hour fire endurance rating,” he explains. “The 3.5-inch dovetail deck topped with 2 inches of light-density concrete actually achieves a 2-hour rating.  For projects utilizing regular-weight concrete, increasing the cover to only 2.25 inches (5.75-inch total slab) would also suffice for 2-hour designs.”

During construction, Iott says the CFS wall-dovetail composite floor deck system offers another fire-safety component: avoiding a wood frame, which is trendy among some segments of the hospitality industry.

“I’m not a fan of wood framing for this scale of construction even though it is permissible under the current building codes,” he says. “With this system, we avoided the possibility of a catastrophic fire during construction, which is the most dangerous time. Long-term exposure of wood frames to wind, rain and the ocean-air can also be troublesome.

“Furthermore, multi-story wood-framed construction runs the risk of near-term issues related to shrinkage of structural components, which can cause many problems. The long-term issues related to water intrusion with the potential for structural degradation is a huge concern in a hostile ocean environment such as Ocean City. The combination of load-bearing cold-formed frame walls coupled with the dovetail deck creates a very dimensionally stable structural frame, which with a properly designed and constructed building envelope will ensure many years of service.”

Once complete, the Aloft Ocean City added 60 jobs to the local economy and contributed to a surge in redevelopment of the 45th Street Village area. A half-mile south of the Aloft, Ocean City’s Roland E. Powell Convention Center is undergoing a $24.5 million expansion.

“This is Blue Water’s first new construction in Ocean City, and I’ve loved watching it progress from blueprint to reality,” says Todd Burbage, co-owner of Blue Water Development and Real Hospitality Group. “Aloft was designed with a modern, open-air style that incorporates the look and feel of the ocean environment.”

“Infusing jobs and business opportunities into our local economy is very important to us,” he added. “Locally sourced builders are always a priority for us; we employed over 100 individuals from local construction companies to work on the Aloft.”

Iott already is looking ahead to the next opportunity to use a dovetail thin-slab, long-span composite floor deck system.

“We’ve got another hotel on the boards that we are very excited about. That owner watched the Aloft as it was under construction and is encouraging us to use the same structural system on his hotel,” he says. “It’s going to be 7 stories above a podium, so we’re going to see what it’s going to take to make it work.” 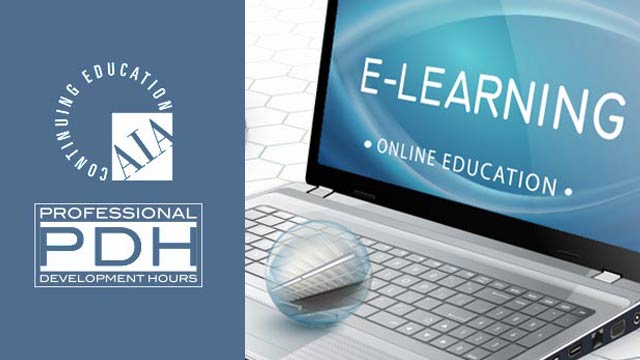 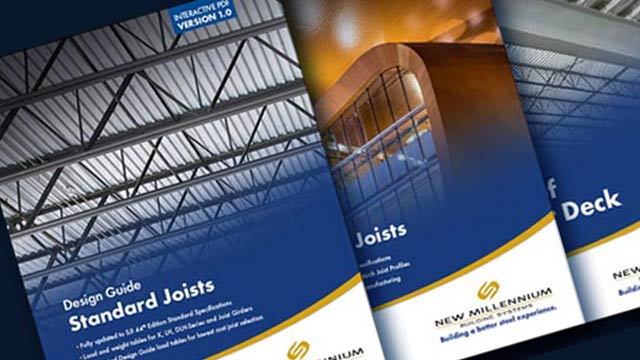 Design quicker and more efficiently with our full set of load table catalogs for steel joists and steel deck. These in-depth catalogs feature the latest industry information and are available in convenient, interactive PDF format.