Why steel is the superior bridge deck forming system

Steel stay-in-place bridge forms eliminate or alleviate the inherent dangers of bridge repairs or construction. This work often takes place at heights over waterways or over vehicular traffic, both risky environments for construction crews. Using steel forms is safer than wood forms for several reasons.

Unlike wood forms that must be assembled, installed and removed, steel stay-in-place bridge forms can be placed on supporting steel or concrete girders from above. Sev Mullen, district sales manager at New Millennium Building Systems, says this is a huge advantage of steel forms.

“When the bridge is going over roadways and especially over water, they don’t have to get on a barge or a boat underneath to work under the bridge,” he says.

“If you’re removing wood forms particularly over traffic, it becomes a very dangerous operation,” he explains.

New Millennium provides two steel stay-in-place bridge deck forms: Bridge-Dek® and Rhino-Dek®. Both provide a safe working platform immediately after installation. Wood forms made of plywood can fail when workers step on them.

“With Bridge-Dek® you’re working strictly on top of the bridge for the installation, and once it’s installed you have a safe working platform for the whole working length of the bridge,” Arvay says.

“It’s a safety factor,” Mullen adds. “That’s one of our big advantages.”

Protecting areas around the site

The safety of steel stay-in-place bridge forms also benefits areas under and around bridges—sometimes long after work is done. Bridges have a typical service life up to about 50 years, says Mullen, who estimates many of the rehabilitation projects he sees involve bridges built in the 1960s and 1970s. A recent American Road & Transportation Builders Association report found 45,023 of America’s 618,422 bridges are “structurally deficient” and need urgent repairs.

As bridges age or decay, weakened concrete can break away and fall, posing a risk to people, traffic and structures below. Steel forms that remain integral to the bridge structure prevent this.

“If the underside of the deck does eventually start to fail and deteriorate, and you don’t have the stay-in-place steel form underneath, you’re going to have falling concrete,” Arvay says. “If you do have the steel form, spalling deck concrete is contained and can’t fall and injure anyone.”

The same benefit is realized during construction.

“Steel deck also separates whatever’s under the bridge from, say, a dropped hammer or box of bolts,” Arvay says. “It keeps things from falling through.”

Speed of construction and project timelines are particularly important in bridge projects that may disrupt traffic flow and commerce in communities. Steel stay-in-place bridge forms streamline and facilitate construction in multiple ways.

By virtue of their design, steel bridge deck forms keep repair or new construction projects on schedule. Steel bridge deck seamlessly integrates with concrete or steel girders. The deck panels are easily staged on the job site and can be retrieved when needed.

Once on the frame, the strength of the steel deck can support workers instantly. This limits work interruptions and keeps workers on schedule. The deck panels’ factory-closed ends also mean the concrete pour can take place as soon as the forms are connected to the girders.

“Crews don’t have to get underneath the bridge to construct removable deck forms,” Mullen says. “Then of course once they put the steel deck down, they’re not having to go back underneath and take the forms out.”

In harsh environments, polymer-laminated bridge deck, including Rhino-Dek from New Millennium, eliminates welding. That connection process could mar the protective surface. Instead, it is bolted or screwed to the girders, which is quicker and cheaper than welding in the field.

Arvay and Mullen estimate installation time of stay-in-place bridge deck is 50 percent quicker than that of wood forms requiring assembling, installation and removal.

Taken together, the benefits of steel forms add up to overall cost savings. Compared to wood forms, steel reduces costs 20 percent to 25 percent.

Since steel bridge deck becomes part of the structure, it removes the need to buy materials for temporary wood forms. Most importantly, however, steel deck requires less labor.

“When you think about the labor involved to build the plywood forms and then strip them back out when the concrete has cured, the installed cost of the metal deck is less,” Arvay says.

Designed to be long-lasting, steel bridge deck forms lower long-term maintenance costs. The deck can be galvanized to resist corrosion from road salt used in winter or can be covered in a polymer-laminate coating to endure saltwater environments. Rhino-Dek, for example, has a 124-year service life, the Florida Department of Transportation has determined. 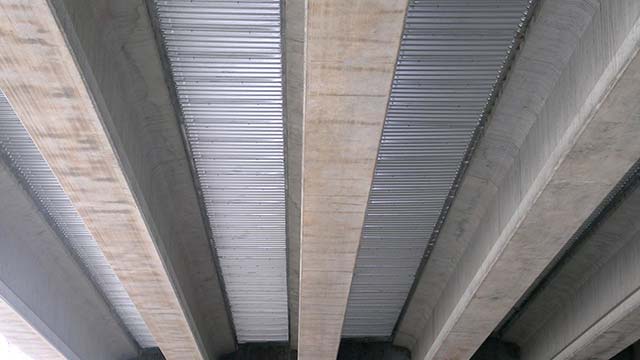 Bridge-Dek and Rhino-Dek from New Millennium are ideal for bridge repairs and new construction. They are manufactured in a controlled environment and fabricated from high-strength galvanized steel to meet design requirements. Both systems include four standard profiles and numerous matching rebar profiles that economically span distances up to 14 feet.

In projects requiring customization, New Millennium provides detailed shop drawings, which can greatly contribute to the success of the project. Making sure things are done right the first time can increase job-site safety, speed erection and help contain project costs. 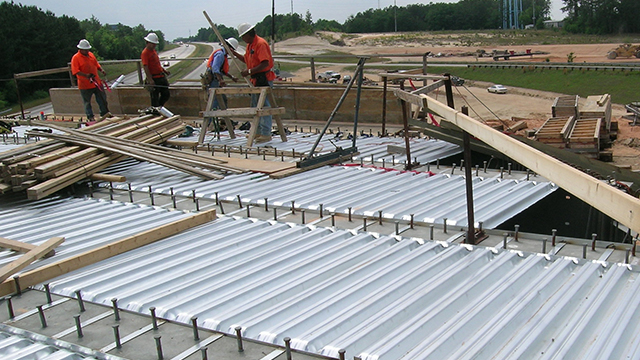 A bridge to better infrastructure

Stay-in-place bridge deck forming systems that are quicker, safer and longer-lasting than the alternatives are the logical choice for upgrading America’s crumbling infrastructure. 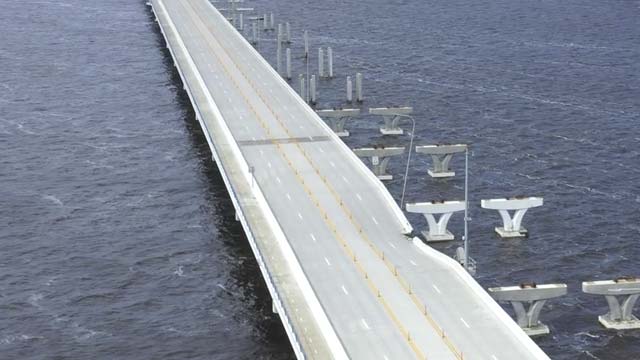 When Hurricane Sally struck Florida, it shut down the recently completed Pensacola Bay Bridge. Steel stay-in-place bridge deck forms helped get it back up and running quickly.